South London Community Music’s founder and Music Director Bob Bridges was raised in Hawaii and California, and was a child prodigy, conducting at the Edinburgh International Festival when still in his teens. He decided on a career change in his 20s and entered the world of finance, and focusing on community music avocationally. 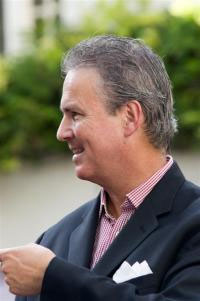 Later in life Bob came to London, ostensibly for a few months to teach musicianship to young people at the Royal College of Music, but has lived in London ever since, being granted dual citizenship a few years ago.

In the States, he gained extensive experience of conducting bands, orchestras and choirs. He was Founding Director of the South San Francisco Symphony and its Conductor for eight years, and also spent 15 years as Conductor of the chamber orchestra and wind band of the Deutscher Musik Verein, which garnered several international competition awards. His choral work has included numerous festivals and hundreds of performances, principally in Europe and the Pacific Basin.

Bob has been a Trustee of several UK-based humanitarian charities, and served on the Board of the British Association of Symphonic Bands and Wind Ensembles (BASBWE) for many years.

His extensive business affiliations have led to his being affirmed as a Fellow of the Institute of Directors in London.

In 2014 Bob was a co-recipient of the Lady Hilary Groves Prize, in recognition of his outstanding contribution to music in the community.